No one asks me why I am motivated to lose weight and stay the course while eating a whole foods plant-based diet, why I get up at 4:30 most mornings to do some cardio at the Y, why I am so hell-bent, laser-focused on getting off the excess weight and reversing diseases. I mean, it's kind of a no-brainer. Who doesn't want to feel better and look better, right? So when I visited the Barnard Medical Center in Washington D.C. in late October to meet with Dr. James Loomis for the first time, I wasn't prepared for the question his medical students posed to me, "Why did you finally decide to stick with it?" They were essentially asking me why I didn't give up on this way of eating, this attempt to get healthy, the way I had done countless of other times for the previous four decades. I wasn't prepared for the question but when I took a minute to ponder it, I knew immediately that the convergence of a few events and a few people made all the difference and a lifetime of frustration, fatigue, and most recently illness had set the stage for my why to catapult me into a brave new world of healthy and happy.

If you've been reading my blog you already know that I have struggled with my weight my entire adolescent and adult life and I lost the struggle and was defeated, down on the ground for the count, about 30 years ago. The ref had blown the whistle and I was just waiting to be hauled off the mat. Last April I really felt like I may be getting close to getting off the mat but not of my own volition. I was miserable, just miserable. Not quite the heaviest I had ever been but certainly the sickest I had ever been. My A1C was out of control even with insulin and Metformin. My blood pressure was too high even with two medications. Acid reflux was keeping me up most nights. I huffed and puffed every time I walked around if I got up and moved at all. I was constantly fatigued and lethargic. I missed out on so many life events that I lost friends and ruined relationships. I was depressed and anxiety-ridden. I was scared my heart was going to give out on me like it did on my mom. I had heart flutters and chest tightness. I cried all of the time. I hated myself. I hated my life. And I felt utterly helpless and powerless to do anything to change it. Cutting calories and exercising more didn't make any significant change for me the countless other times I had tried it. I needed big changes and I had all but given up.

So just as I thought I was going to be carried off the mat by the EMTs, a screening of "Eating You Alive" was scheduled for a showing at a theater in Des Peres. This is a WFPB film that was having a rerelease in theaters and several theaters in St. Louis were showing it one evening in April. I'm not sure who coordinated the showings but I'm grateful they did. I'm also not sure why two and a half years after first watching "Forks Over Knives" but not actually adopting the lifestyle, I decided I was going to buy a ticket to go watch "Eating You Alive" on a work night when I could barely function I was so tired, but I did. And, boy, am I glad I did.  I walked into the theater alone and nervous. I was self-conscious because I was so uncomfortable in my own skin and cognizant of how unhealthy I was, but I found the theater and took a seat in the very back row and tried to look small, which was quite the trick for someone my size. But someone very kind and very friendly came up to me and asked to sit by me. She turned out to be great, someone I became friends with and I know to this day. The first victory of the day unbeknownst to me at the time. Talking to her put me at ease and made the nervousness I was feeling go away. Then, just a few minutes later, a woman I recognized from her Facebook profile picture approached. Elaine, a woman I met on a national Engine 2 Facebook group the summer before but whom I hadn't met in person and hadn't actually chatted with recently, approached. She too was kind and gracious. She told me about Caryn, STL VegGirl, who was at the front of the theater, and who would be speaking before the film started. Oh, and there was a film crew there filming a vegan documentary. Woah. This was a lot for me to take in while I was trying to slink into my seat and look small but the excitement of the evening, of meeting new people who were kind, was hard not to absorb. The film started and I was engrossed. One woman's story in particular resonated with me. She lost over 100 pounds, reversed type 2 diabetes, and transformed her life. The tears poured down my face every time she was on the screen. I want to do that for myself I told myself. I even looked her up on Facebook. I don't know why. It's as if I thought she would have the magic sauce that would get me to my goal but I just poked around her public profile and then let it be but her story never left me.

Maybe two or three weeks later I was signed up to take a WFPB cooking class at Dierberg's with STL VegGirl. This would be the first one I would actually attend. I had actually signed up for others and paid for them but always bailed and never attended. I was an expert at backing out of commitments. But this time I went but not before making a stop along the way. I had just started yet another medication a day or two before. At this point, I was taking nine or 10 prescription medications a day for multiple maladies. I needed to eat with the medication and my stomach was upset. I stopped at fast food and got something to eat to take with the medicine. I felt awful before the food and even worse after.  I arrived at the class self-conscious, my perpetual state of being, and put on an apron (which didn't fit very well) and got ready to participate in the class. Elaine was there and she came right up to me and spoke to me like she had known me forever. She is a kind soul and is a big reason for my success although I'm not sure she realizes it. Her encouragement in the early days of my journey put me on the right path and helped me believe in myself.

During the class, I got paired up with someone to make a dish, I don't even remember what we were cooking, and all was going well but I was tired and felt pretty rough. Near the end of the recipe, I excused myself and went to the restroom because I was extremely warm and perspiring and felt nauseous. Once in the bathroom, I'm embarrassed to say I spent the next five minutes vomiting. Was it from the fast food or the medication or both, I don't know? But I was really, really sick and just wanted to crawl up in a ball on the floor and sleep but I had to go back into that kitchen classroom and face those people like nothing had happened and then I had to drive home. I had to do it. So I cleaned up myself, put my jacket over my clothes even though I was hot, and tried to not look like the basket case that I was. I went back into the kitchen and sat at the counter, excusing myself from the rest of the cooking. No one asked why too much. I said something about not feeling well. When the food was served everyone made a plate, myself included, and sat to eat. I couldn't eat, though. I was so sick. The irony was that this food wouldn't have made me sick in the first place but it was too late. Caryn noticed I wasn't eating and asked why. I vaguely told her I was taking a new medication that was making me nauseous and that I didn't want to eat and she said something to the effect of  "we need to get you fixed up." Those weren't her exact words but I knew she meant that the WFPB lifestyle would cure would ailed me and the 'we' kind of gave me hope.

At some point in the evening, Elaine came up to me and took my face in her hands and held me and said that I was worth taking care of and that I was worthy. She said it multiple times. She told me that she would be there to help me. She offered help in both concrete and spiritual ways. She brought tears to my eyes then just as the tears flow now while writing about it all of these months later. It was as if she was looking inside me and knew exactly what my deepest being needed to hear. I don't know how a virtual stranger could do this except that God sent an angel to me that night. I thank God for Elaine.


Fast forward to today, I've lost 94 pounds so far. I've reversed type 2 diabetes and hypertension. I move without pain and restriction. I am happy. I am energetic. I feel a sense of vitality and freedom that I have never felt before in my life. It hasn't come overnight and the journey is not done, but if you're reading this and you're struggling, let me tell you that you can do this. It is possible. I was not a poster child for success and I did it. You can do this. You can feel better. Love yourself enough to treat yourself with the love and care you would offer up someone else. You deserve it. 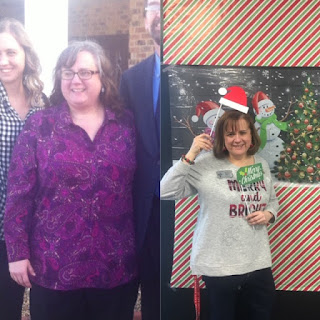 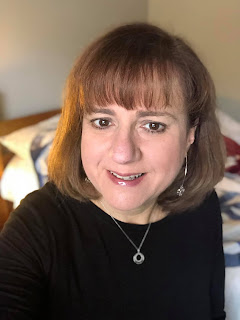 Happy and healthy today
but still in the midst of
my journey.
Posted by Kara Bell at 10:45 AM