I received some amazing news this week but first the back story...

I remember very clearly walking through the crowded aisles of the Ben Franklin Five and Dime store with my dad while he picked up a package of balsa wood airplanes, pick up sticks, and a much-coveted bag of shiny marbles and told me that I could pick out other things that I wanted as well. I was a bit giddy as my six-year-old self combed the toy bins of one of my favorite stores in the small town in which we lived but I was also a bit confused. Buying toys, even seemingly inexpensive ones, with reckless abandon wasn't a normal occurrence and my dad was acting a bit odd. It wasn't until years later that I realized this shopping spree occurred right after my dad left the doctor's appointment where he got the news that he had type 2 diabetes. He thought it was his death sentence so he was spoiling his only child with some trinkets that he knew I would enjoy and that he could enjoy with me. Years later we would laugh about the day he thought he was going to die and the bag of marbles but really, it wasn't all that funny. Diabetes ravaged my dad's body for years to come after his diagnoses in 1973 until his death in 2015.

My dad was a big man. Physically he topped the scales at over 300 pounds most of my life and he had a larger than life personality that accompanied his big body. He loved to eat, he loved to talk, he loved to tell jokes and stories, and he loved people. What he didn't love was to follow the American Diabetes Association (ADA) recommended diet and, quiet frankly, even when he did, it didn't help control his blood sugar significantly. He first developed diabetic peripheral nephropathy about seven years after his initial diagnosis, although I'm sure he was actually diabetic for much longer, and it wasn't but a few years later that the first diabetic ulcer appeared on one of his toes. He lived with an open, festering sore or multiple infections on his feet from 1984 until his death in 2015 because of his diabetes and those sores were only the outward manifestation of how the disease took its toll on his body. 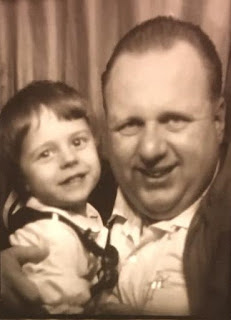 So, you see, I thought this was my destiny.  I thought I couldn't escape type 2 diabetes. Having been overweight since age 10, and diagnosed with Polycystic Ovary Syndrome (PCOS) at age 31, and symptomatic since my teen years, I figured it was only a matter of time before I too would be buying marbles in the five and dime. After all, PCOS is a form of insulin resistance and I had the darkened skin on my neck (acanthosis nigricans) since I was in my mid-twenties, a tell-tale sign of out of control blood glucose, and the belly fat associated with type 2 diabetes. The statistics at the time indicated that 80 percent of women who had PCOS would be diagnosed with type 2 diabetes by the age of 40. And, of course, I had a strong family history with a parent having the disease and let's not forget that I also loved to eat like my dad ate. So when I was diagnosed with type 2 diabetes at age 39 I was fairly nonplussed by the diagnosis. I had already been taking Metformin, an oral diabetes medication, for several years because it was considered standard treatment for PCOS at the time. But obviously the Metformin alone was not controlling the insulin resistance. I met with an ADA certified dietician and was instructed in the ADA diet. I was given a glucose monitor and test strips and told to test regularly. I may have been told to exercise; I don't recall. I tried sporadically to heed the advice but counting carbs left me hungry and unsatisfied and even when I was 100 percent faithful to the ADA diet, my blood glucose readings were not within range, even while on Metformin. For many years I tried a number of diets to control my diabetes to no avail.

If you've been reading my blog you know that I began eating a whole foods plant-based no oil (WFPBNO) diet in May 2018 and have taken off 98 pounds to date. Additionally, my previously high blood pressure has corrected itself and I no longer take two blood pressure medications, the acid reflux that plagued me and kept me up at nights left about three days after starting to eat the WFPBNO diet, my back pain, stiffness, and debilitating fatigue that rendered me sedentary is a thing of the past, and the list goes on. I was taken off insulin, which I had to begin in August of 2017 because the diabetes had gotten so out of control, several months ago and I was finally taken off of the last of the Metformin (my dosage had been lowered to the lowest dose as I had continued to lose weight while eating WFPBNO) in late October 2018. So since late October I've been controlling my type 2 diabetes with diet alone, which I have to admit was a little nerve-wracking. I was extremely diligent about testing my blood. The numbers always looked good, actually far better than they ever looked while I was taking the medications. I continued to eat WFPBNO and exercise and live my life. And this week I saw my doctor for my regular check up and for my A1C test, the test that indicates your average blood glucose levels for the last three months.

And the news is nothing less than remarkable. My doctor informed me that I have reversed my type 2 diabetes; I am no longer diabetic! I sat across from her as she gave me the news and I broke down in tears because I didn't know when I started this journey if it would be possible for me to reverse the disease that had I been battling for over a decade. But the A1C showed that diet alone had lowered my A1C even more than when I was taking medication, with a reading of 5, my blood glucose levels were firmly planted in the non-diabetic range and I had done it with whole foods plant-based nutrition alone. I didn't count calories, fat, or the dreaded carbs. In fact, about 80 percent of my calories come from unprocessed, complex carbohydrates. Yes, you heard that right. I eat a diet rich in complex carbohydrates such as brown rice, sweet potatoes, potatoes, squash, whole grains, lentils, peas, and beans. And, of course, I fill up on lots of other fruits and vegetables that are not calorically dense but fill my stomach. So the singular decision to eat real food, unprocessed plant foods, did for me what no fad diet and no carb or calorie counting ever did. It gave me back control of my life so that diabetes didn't have to be my destiny. If you would have told me a year ago I would be writing about having lost almost 100 pounds and, more importantly, kicked diabetes to the curb, I would have shaken my head at you in disbelief. I've said this before and I will continue to say it, I was not the poster child for success. If I can do this, others can do this.  There are considerable resources available for those who want to learn more about eating a WFPBNO diet and who are interested in taking control of their lives and shaping their own destiny. I'll share some of those resources below. It is my hope that my story will demonstrate that it's not too late to make a change and to take control of your own destiny. I didn't have to buy the bag of marbles and you don't either.

Resources that helped me...